In another new set of blogs for this season I will be looking at certain aspects of the game, both good and bad, with a somewhat analytical eye. Well I can’t be any worse than some of the BBC Wales/S4c ‘pundits’!

This week’s focus comes from our opening two games and how impressive our attacking shape has looked. An acknowledgement of the work of new attack and backs coach Matt Sherratt, as well as skills coach Paul John, under the guidance of Danny Wilson. After years of kick and chase this year has built on the foundations of last season and provided a breath of fresh air.

So what has changed? Well nothing complex is the answer. Last year the attacking shape was very basic, yet worked very well. Shift the ball wide quickly and get the fast guys running. Dan Fish, Rhys Patchell, Tom James and Aled Summerhill all benefitted greatly from that scoring a combined 34 tries in all competitions. Now though there’s been some slight attacking line changes where the shape is still basic but keeps the defence guessing.

The setup is one that Wasps have used a lot in the last few years, where I first saw it, and has been adopted in the recent Super Rugby season. I see it as a triangular pod, although I’m sure there’s a more technical name for it, and it works by having the player in the stand-off position receiving the ball and having a forward running a crash ball line, while a back runs a wider angle from a deeper position behind the breakdown or set piece.

In practice it’s fairly standard, in this example against Edinburgh you have Gethin Jenkins playing the first receiver role while Nick Williams offers the crash ball option. With the New Zealander being such a threat coming at pace the bunch of defenders ahead of him are occupied, as are the two outside men with their shoulders facing in field.

On this occasion the ball is slipped out the back of the triangle to Gareth Anscombe who takes advantage of the outside defenders poor body positions and fashions a little half break. 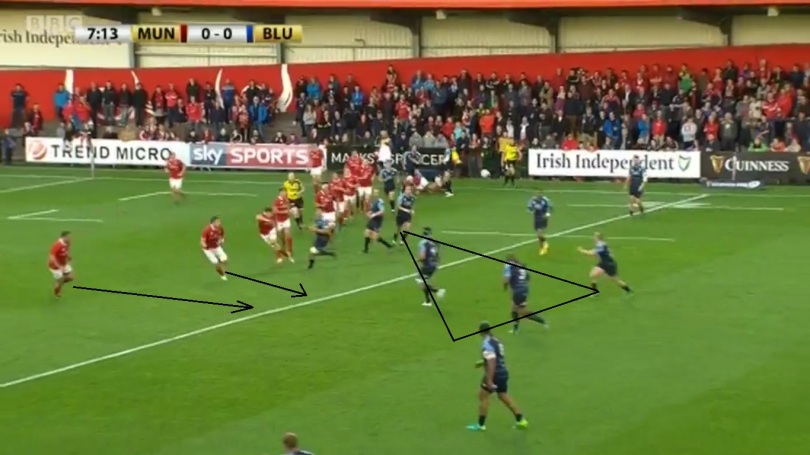 The second example is from the Munster game and is a slightly expanded version of the triangle whereby Anscombe at stand-off uses Kris Dacey, Ellis Jenkins, George Earle and Fa’ao Filise as the dummy runners to find Dan Fish running from deep. That breakdown on the far side had come from a set piece on the left wing meaning the majority of Munster backs were a part of the 12 defenders you can see tied up in the picture, leading to… Tom James takes the ball from Dan Fish and is in his element with five yards of space to run into and an opposition hooker (circled) to take on. He turns on the afterburners before stepping inside the full-back to score the opening try of the evening. All created by the space afforded by a well executed triangle pod move adding space and speed..

Just two examples of that basic two-second midfield move working well, one of which leading to a try, and I found six more times that triangular pod was used to at least get over the gain line for front foot ball across the two games. Simple yet effective, the new Cardiff Blues attacking way.

The move has contributed to 23 line breaks across the first two games of the season, a very respectable number considering in the first pre-season game away at Newport I don’t recall a single one. It’s not only the example above though, that can’t be used everytime and won’t work each time it is brought out.

There’s been a long game aspect to our attacking plan this year, phase play that I am certainly not used to seeing. It still feels like the ball is going to be spilled at any moment after three phrases or anytime we enter the redzone. In reality though the forwards are becoming far more capable at not only going through phases, but taking up defenders and making yards.

From there the space is created and the backs, as well as the forwards out wide, are very prepared to run directly and in numbers. Take a look at Steve Shingler’s try vs Edinburgh for example..

Previous to the picture the attack started from a scrum perhaps about five yards behind where Shingler is there. This is around phase eight now and the space has been created. Tomos Williams finds Shingler, with Rhys Gill and Rey Lee-Lo running hard inside him, Dan Fish and Cory Allen outside him, he exploits the space left by the forwards taking up defenders with a simple dummy pass and run.

This hard running works in the back field too and the desire of the attackers to continue the support running after breaking through the defensive line is encouraging. It’s also been a factor in the amount of tries scored so far as the chance conversion has been much higher thanks to players running off the shoulder. Not the best picture I admit but I hope it shows that, after Matthew Morgan had stepped and offloaded to Rey Lee-Lo, the Samoan still had Lloyd Williams, Josh Turnbull and Dan Fish with him in support which would eventually lead to a try for the ginger wizard.

Most of this so far has been a credit to Matt Sherratt, but the offloading side of the game has to lead to a nod for Paul John. He is long been on the end of criticism from Cardiff fans, but as skills coach he seems to have found his element.

With a background in 7s coaching the skills suit him down to the ground and has led to some beautiful pieces of handling, an increase in the quality of kicking out of hand and finally 15 offloads across the two opening games, probably as much as we managed altogether since 2011 (maybe slightly exaggerated but you get the point). 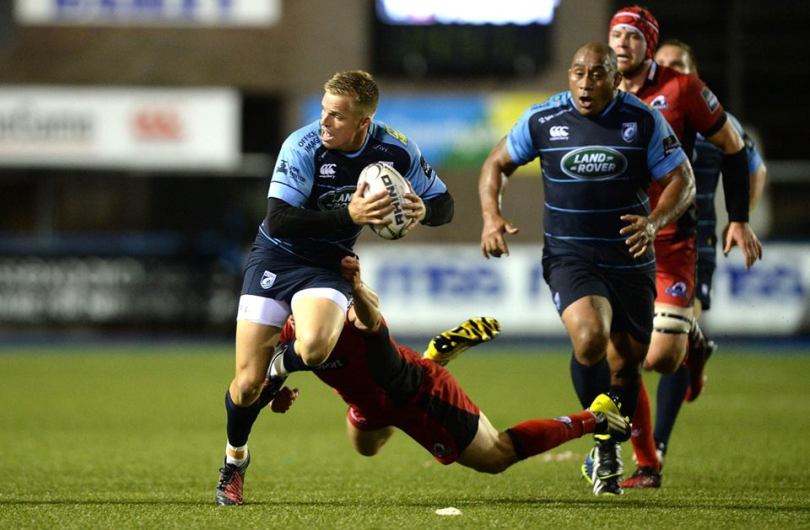 Overall it’s been an extremely positive attacking outlook that has contributed to a successful opening to the Pro12 campaign. We have dominated possession and territory, made a number of line breaks and offloads, beaten 25 defenders and scored 58 points. The last time we were playing with such freedom that were Challenge and Anglo-Welsh Cups being won.

It’s early days yet, and this attack will have to be more than on top of it’s game when Glasgow visit on Friday night, but the early signs are looking very good indeed. Come on Cardiff!!