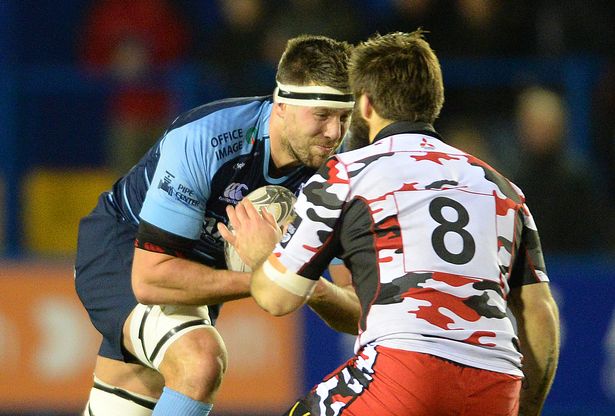 So after looking at the front row last time out it’s now time to move onto the big boys at lock. There’s been a bit of a clearout amongst the second row ranks over the summer as Lou Reed, Chris Dicomidis and Miles Normandale have all moved on, but between new signings and talented youngsters we’re not in too bad of a position.

The longest serving lock in their current spell at the club is one of our non-Welsh qualified players, Jarrad Hoeata. Into his third season the three-cap All Black appeared 21 times last year taking his total to 39 overall. It’s fair to say that he didn’t particularly win over a lot of the fan base in his first year with no real stand-out performances and some disciplinary issues on the pitch.

However last season was an improvement on that as a consistent campaign and much better discipline record saw fans warm to him, especially through his work with the supporters club. A strong partnership with James Down aided that as they bonded well together in the middle of a largely dominant pack throughout Danny Wilson’s first campaign.

Down himself is now into his 10th season at the Arms Park across two spells after returning last year from London Welsh. He had a very solid returning campaign as a good lineout jumper and thrived under Wilson’s focus on the driving maul. As a willing ball carrier he’s a good option in the line, but he’s never a huge yard maker.

At the same time he’s not particularly agile meaning he’s somewhat stuck in the middle of a heavy second row and a ball playing second row. That’s not to say he’s a bad player though, he’s a good Pro12 player which is exactly what we’ve been lacking between internationals and no-hopers over the years. At 29 he’s still at the peak of his rugby career and I’m sure he’ll add plenty of caps to his current 89.

In a bid to add some weight into the second row ranks that is lacking amongst Hoeata and Down, Danny Wilson has brought in George Earle from one of his former clubs Llanelli. An out-and-out number five he will provide some power in the scrum and maul, as well as a go-to ball carrier. In his playing style and appearance he’s a typically physical South African, just as you’d expect.

Signing for Llanelli in 2012/13 from Super Rugby he went on to make 92 appearances during his time at Parc y Scarlets, and also gained his Welsh-qualified status having played in Wales for  three years. Earle’s departure has slightly split opinions down West as his playing ability is undoubted, but an especially injury prone last season plus the arrival of David Bulbring and Rynier Bernardo mean he isn’t seen as a massive loss.

Although the signing of Earle has boosted the second row ranks, the departure of the Dicomidis, Reed and Normandale means it’s just the three natural locks in the senior squad for 2016/17. There are however a number of back row players who will be profiled fully in the next blog of the series, but that are worth mentioning here. Cameron Dolan, Macauley Cook and Josh Turnbull are all capable of covering lock and did so throughout last season at various points.

Dolan in particular may be used in the second row often after some impressive performances there towards the end of the last campaign, while many think Turnbull starting at four with the three flankers of Ellis Jenkins, Josh Navidi and Sam Warburton in the back row forms our best selection, something I very much agree with.

The other option to cover the second row is the academy squad and there are two exciting prospects waiting to get a chance in the senior side. Both Seb Davies and Shane Lewis-Hughes were involved in the Wales U20 Junior World Championship squad over the summer and actually lined up as the lock partnership in three games, while Lewis-Hughes moved to flanker for another.

Davies is the most natural second row of the two, standing at 6’6″ and weighing over 17st. He has appeared in the Premiership 7s and LV Cup squads, scoring a try over Wasps in that amazing comeback win in 2014/15. He did make one A team appearance last season in a friendly against Ospreys but suffered a nasty shoulder injury which kept him out until April. He returned to help Pontypridd to the Premiership Final but missed out on a Pro12 debut.

At 19 Lewis-Hughes is a year younger than Davies and as such has not had exposure to senior rugby as yet. The Coleg y Cymoedd student has been part of the successful rugby setup there though and appeared at Cardiff U18 level. In terms of his future he certainly has the height to play lock, but the weight will be the question as he develops. He could be a handy number four to Davies’ five, but may be better suited to flanker, a season in the Anglo-Welsh and British-Irish Cups will help decide that.

Overall while the senior options are good in the second row, they are limited in the quantity of natural players for the position. Danny Wilson will be hoping to avoid any injury crises in the lock or back row areas which could well leave us very short on the ground. Exciting academy prospects, like in the front row, make for a bright future and it will be interesting to see how they get on in senior professional rugby.

Next up, the men of the back row…