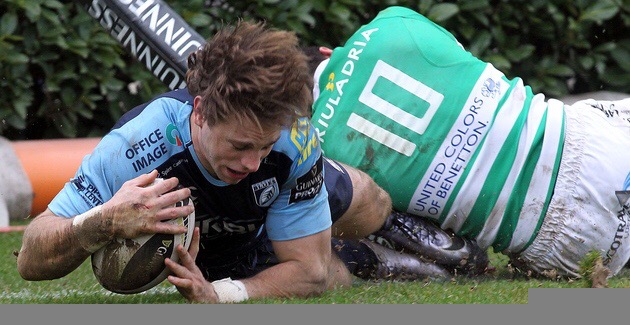 The cup runs were over and Cardiff were out of both the European Challenge Cup and the British and Irish Cup. Despite positive performances throughout both campaigns the focus was now solely on the Pro12 but, after a dreadful opening to the season, the three league wins in December meant the second half of 2015/16 looked promising.

As the end of January rolled around it was time again for the annual exodus of Team Wales players to be beasted by Warren Gatland so the team to take on Edinburgh for our return to Pro12 action was without Kris Dacey, Gethin Jenkins, Josh Turnbull, Sam Warburton, Lloyd Williams, Gareth Anscombe, Cory Allen and Alex Cuthbert.

This gave a number of academy players the chance to shine with Aled Summerhill, Elis Wyn Benham, Jarrod Evans, Tomos Williams, Dillon Lewis, Ethan Lewis and Brad Thyer all involved in the match day 23. Joining the youngsters was the experience of Australian international tight head Salesi Ma’afu making his debut after arriving from Toulon in December.

The slightly makeshift starting XV managed to absolutely fly out of the blocks with Dan Fish crossing from the first attack of the game after being released by good hands from Summerhill and Jarrad Hoeata. Rhys Patchell notched the tricky conversion and slotted a penalty 15 minutes later, before Edinburgh’s Nathan Fowles got a penalty of his own which was it for the scoring, after just 22 minutes.

There was an hour of no score despite regular trips to the red zone for Cardiff, but Patchell and Manoa Vosawai both had tries narrowly chalked off by the TMO and the driving maul just could not get over the line. We also spent 10 fruitless minutes playing against 14 Edinburgh men, who themselves never really looked like taking the win despite being just seven points behind for most of the match.

This lacklustre performance, albeit one that secured a win, would set the tone for the next few weeks. First up was a trip out to Treviso for what was becoming an increasingly bogey game. It was no different this time as we went down 13-7. In a similar showing to the Edinburgh game it was a low scoring game where we never really got going.

Treviso started much the better side and went 6-0 up thanks to the boot of Jayden Hayward, before a converted try from Blaine Scully, his first in the Pro12, put Cardiff ahead. Looking strong either side of half-time it seemed we’d push on but a dominant Treviso scrum five metres out eventually produced a penalty try and no amount of attacking from us could get the win from a rainy Northern Italy.

The next week Leinster were the first team to arrive at CAP in February in the middle of some even worse weather. The wind and rain howled as the game was dominated with pick-and-go drives due to kicking being largely hopeless. Some short range penalties from Ian Madigan and Gareth Anscombe got points on the board though resulting in a 6-9 Leinster lead.

On the hour mark the sucker punch was delivered as Isa Nacewa disappeared up the short side from inside his own half to score a breakaway try. This sparked Cardiff into life and wave after wave of attack was thrown at the Leinster line until Josh Navidi touched down with a few minutes to go, unfortunately too little too late. However, this last minute comeback attempt would set a tone for the next few games.

Leinster’s Irish counterparts Ulster were next up at CAP and at 6-13 down at the beginning of the second half things were not looking good again. The difference now though was that the attacking instinct had returned and late tries from Rhys Patchell and Aled Summerhill meant it was an excellent 23-13 Cardiff win. Unfortunately the Six Nations period limped to an end for us, just as it did for Wales.

At this point of the season we were becoming a very black and white team for a side that plays in blue. When we were good we were unbeatable, but when we were bad then it was almost like returning to the Phil Davies days. The challenge for Danny Wilson was to get the players playing at the top of their game for at least more than 40 minutes.

A trip to Glasgow was the way to start March and the search for a game where the majority of the time is spent playing well went on. The Scots battered us up front for the entire first 40 minutes with tries from Gordon Reid and Tim Swinson, as well as Duncan Weir’s boot, putting them 20-0 up. Cardiff were in the game possession-wise, but never looked like doing anything with it.

A half-time rocket from Wilson, alongside four early second half substitutions, lifted the team and eventually after 56 minutes, Rhys Patchell got us on the board.From this point on it was sheer Cardiff domination which eventually broke the Glasgow lines through a Dan Fish chip and chase. 10 minutes to go and 10 points down there was to be a huge end to the encounter.

From the kick-off Aled Summerhill was, somewhat unfairly in my view, sin binned for ‘taking a man out in the air’. Glasgow subsequently went to the corner and drove Simone Favaro over. At this point the game seemed up, but there was a never say die attitude amongst the side that was long overdue. All inside the last three minutes Ellis Jenkins and Macauley Cook both went over to score, and Patchell nailed both conversions to secure the most unlikely bonus point.

Despite a very up and down few weeks during the Six Nations Cardiff still managed to emerge with 11 points from five games. After the nightmare of the first few months of the season this was still a decent haul and set us up for a late season assault on the top six.

Although we saw some of the most frustrating moments of the season there was also the encouraging signs of a dominant second half in Glasgow and an excellent win at home to Ulster. With the Six Nations players ready to return surprisingly injury free, we were in for an exciting last few months of 2015/16.